Rezso Gallai [Hungarian: Gallai Rezső] (29 January 1904 – 25 September 2014) was a Hungarian pending supercentenarian who lived to the age of 110 years, 239 days. He was the oldest living man in Europe after the death of 111-year old Arturo Licata on 24 April 2014 until his own death 5 months later. After his passing, Philippe Vocanson of France became the oldest living man in Europe. As of today, he is the oldest known man ever to die in Hungary.

Gallai was born as Rezső Galajda on 29 January 1904, in Szombathely, Hungary. Rezső was a foundling; his mother had left him in the hospital after giving birth, thus he grew up with foster parents in Pápa. He remembered seeing a newspaper article about the sinking of the Titanic in 1912. In his teenage years, he became a jockey. In 1924, he was suspended after he had been disqualified in a race in Vienna. With no money, he had to go home by foot. In 1926, he moved to Győr, where he lived until his death. Shortly after, he started writing stories and novels, in which he was very successful.

As a corporal, Gallai participated in the reannexation of Southern Upper Hungary and Northen Transylvania in 1938 and 1940, respectively. In 1942, he volunteered for military service in the Eastern Front. His main task was to deliver the mail to the soldiers. However, as the circumstances were awful, he decided to destroy one of his hands at a train buffer in order to get home. Luckily, before his planned act, he had been injured in a partisan attack, and was brought to Budapest to a hospial where he was able to recover. He never went back to the front.

After the war, Gallai worked in the water resource management until the age of 94. At the age of 102, his book "Embermesék" was published, therefore he became the oldest active writer in the country. He lived independently in his flat until shortly before his 106th birthday, when he moved to a care home. He was very popular there with his great stories and lovely personality. He would even help other residents in their daily tasks - although they were decades younger. He did not have any health problems except the nightly numbness of his hands. At the age of 110, he was still able to build a snowman. His biggest wish was not to become bedridden, and to die peacefully in his sleep without suffering.

Gallai got first married in 1928, and had a son who emigrated to Cologne, Germany after the 1956 Revolution and never returned. After a divorce, he married to another woman, and had another son who died in 2011. His second wife died in 1994. Rezső was married for 32 years to both of his wives. He had a grandson, Tibor, who visited him regularly.

Gallai at age 30 (at the right), with the family of his first wife 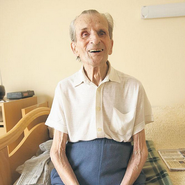