Heneretta 'Rita' Donn (11 January 1889 – 17 January 1999) was a British supercentenarian who was the oldest living person in Scotland following the death of 108-year-old Peggy MacLean in 1997, until her death aged 110 years, 6 days. Her successor as Scotland's oldest person was 109-year-old Jane Redpath.

Rita Donn was born on 11 January 1889 to James Donn and Margaret Mowat. She never married and had one daughter.

Donn worked as a fish gutter during her youth, following the herring fleet to Lerwick in the summer and Lowestoft in the winter. She also worked as a wardmaid at Aberdeen Royal Infirmary and emigrated to Canada with her daughter.

Donn returned to Scotland in the 1960s after living in Canada for about 30 years, and lived in her own home until she was 96.

To celebrate her 103rd birthday, Moray Firth Radio played an accordion number in her honour, which she tuned in to hear. Upon receiving her telegram from the Queen on her 104th birthday, she quipped "Fit wye did she ken aboot me."

Her 105th birthday was marked by a surprise visit from her daughter - who still resided in Canada - and grandson. By her 110th birthday, she still regularly spoke to her daughter on the phone, and could still recite poetry in Doric. 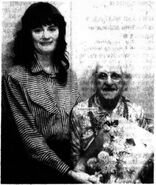 Rita Donn on her 103rd birthday.

Rita Donn on her 105th birthday.