Ronald "Ron" Hermanns (25 September 1911 – 30 August 2021) was a Canadian-New Zealander centenarian who was believed to be the oldest living man and person in New Zealand at the time of his death.

Hermanns was born in Winnipeg, Manitoba, Canada on 25 September 1911. His family moved to New Zealand in 1914, and settled in Wellington. In 1937, Hermanns joined the Wellington Territorial Squadron as an aircraft rigger, and in 1939, joined the Royal New Zealand Air Force. In 1943, he was deployed overseas in Vanuatu (then New Hebrides), where he spent a year working with American troops and servicing aircraft. During the war, Hermanns collected shells and discarded aircraft pieces, and created "trench art", which he donated to the Air Force Museum of New Zealand in 2009.

Herrmanns never married and had no children. Despite losing much of his sight and hearing to the effects of old age, he still lived independently as of his 108th birthday, and still spends much of his time in his workshop. He even built a metal fence in his backyard at age 107, which he constructed in spite of his blindness, instead building it "by feel". His neighbor remarked that he rarely ever complains about anything; his only birthday wish was to be able to see again. 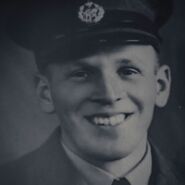 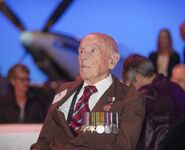