Rosa Barbero de Cammisi was born in Cavour, Las Colonias, Argentina on 15 November 1911, the fifth of 11 children of Antonio Barbero and Matilde Magdalena Goddio. Her grandparents were born in Italy. She was baptized in Humboldt, Las Colonias on 24 January 1912.

She married Alfredo Cammisi, who worked as farmer. The couple had three children: Dorita (aged 81 in November 2021) and the twins Roque and Matilde (aged 74 in November 2021). She was widowed in 1995.

At the age of 38, she moved with her family to Esperanza, Las Colonias.

She enjoyed fishing until the age of 105.

In November 2021, she celebrated her 110th birthday. Her secret to longevity is "never surrender, always get ahead and take shelter under her great passion, fishing."

She became the oldest known (documented) living person in Argentina, following the death of 115-year-old Casilda Benegas on 28 June 2022, but there are older claims. 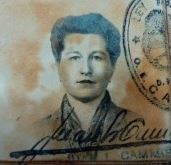 As a young woman (on her ID Card)

Undated, with her three children

Undated, with her family 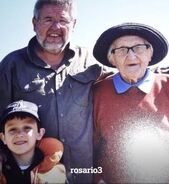 Undated, with her relatives

Undated, with her daughter Dorita and her grandson Victor