Rose Adelaide Heeley (25 August 1864 – 24 December 1975) was a British supercentenarian who, at the time of her death, was the oldest living person in Europe whose age has since been validated by the Gerontology Research Group. She was also the last known surviving European born before 1866.

Heeley was born on 25 August 1864 in Birmingham, West Midlands, England, and attended Edgbaston High School. After caring for parents, she worked for many years as a governess. She died in Droitwich, Worcestershire, England on 24 December 1975 at the age of 111 years, 121 days.

At the time of her death, Heeley was the last known surviving person in both the UK and Europe who was born before 1866. Following her death, Agnes Helyar became the UK's oldest living person, while Marie-Virginie Duhem became Europe's oldest known person. 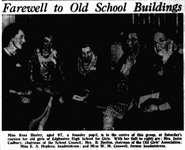