Margaret Ruth Dundas (formely Watson; 12 May 1880 – 7 September 1988) was a Sri Lankan-Scottish centenarian who is the currently oldest known person ever born in Sri Lanka.

Ruth Dundas was born in Ceylon (now Sri Lanka) on 12 May 1880. Her father worked a tea plantation. She moved to Scotland at the age of 10.

She married Rennie Watson in 1914, but while in the Nigerian Navy, he died four years later. 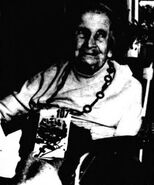