Ruthie Tompson (22 July 1910 – 10 October 2021) was an American animator and supercentenarian. She is most well known for her work on animated features at The Walt Disney Company. Her age is currently unvalidated by the Gerontology Research Group (GRG).

Ruthie Tompson was born on 22 July 1910 in Portland, Maine to Nahum and Athene (Sterling) Tompson and raised in Boston, Massachusetts. She had one younger sister, Dorothy. She moved with her family to Oakland, California in November 1918 at age eight. In 1924, her parents divorced and her mother, Arlene, remarried artist John Roberts. The family relocated to Los Angeles and their house was in the same block as the house of Robert Disney, uncle of Walt Disney. This is where Roy and Walt Disney lived when they first came to Los Angeles.

As she stated in an interview, Tompson first met the Disneys when she visited her neighbor Robert's new baby. The location of The Walt Disney Company, then known as the Disney Brothers Cartoon Studio, was not far from her home – she passed it on her way to grammar school. She was invited into the office after many times of standing outside and watching them work through the window. She visited the office often and ended up appearing in the Alice Comedies.

Ruthie Tompson died in her sleep from natural causes at her home at the Motion Picture and Television Fund in Woodland Hills, California on 10 October 2021 at the age of 111 years, 80 days. 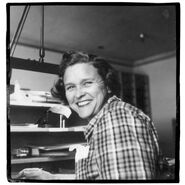 Ruthie Tompson as a young woman.

Ruthie Tompson as an older woman. 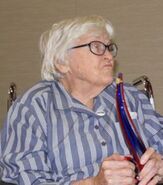 Ruthie Tompson at the age of 105