Sakari Momoi [Japanese: 百井盛] (5 February 1903 – 5 July 2015) was a Japanese supercentenarian whose age is validated by the Gerontology Research Group (GRG). He was the oldest living man in the world from the death of Alexander Imich on 8 June 2014 until his own death on 5 July 2015. He is currently the oldest validated man who ever died in Saitama Prefecture.

In 1928, Momoi married his wife, Tamiko, with whom he had five children. Tamiko died in 1989. He liked reading, especially Chinese poetry, and also practiced calligraphy. 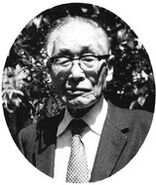 Sakari Momoi at age 104, while speaking at the ceremony of 50th anniversary of the school, in which he worked as a teacher. 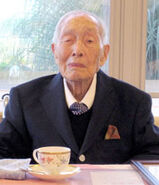