Sandorne Sarkozi (née Erzsebet Kelemen) [Hungarian: Sárközi Sándorné Kelemen Erzsébet] (28 January 1883 – late February 1991) was a Hungarian centenarian who was the oldest living person in Hungary at the time of her death.

Erzsébet was born on 28 January 1883, in Debrecen, Austria-Hungary (present-day Hungary) to a clerk and a tradeswoman. She was one of five siblings. His sisters all lived to be a nonagenarian.

Although she finished secondary education, Erzsébet was a housewife in all her life. She married to Sándor Sárközi in 1908. They had one son and three daughters. Sándor died in 1963, aged 82. Erzsébet rarely left the city of Debrecen and had never been abroad.

Erzsébet had never been sick before the age of 90. Her health started to deteriorate at age 104 when she suffered a fall. She also became deaf at that time and her sight got worse as well. Until then, she would read novels on a regular basis. At age 105, she had 10 grandchildren, 23 great-grandchildren and 3 great-great-grandchildren.

Erzsébet became the oldest living person in Hungary upon Henrik Havasi’s death on 8 November 1990. She died in late February 1991, about a month after her 108th birthday. 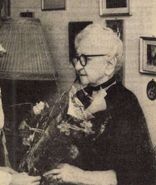