Sara Mendaro Guichon de Valenzuela was born in Florida, Uruguay on 21 December 1911 as the youngest of 10 siblings. She married Hermecendo Valenzuela in 1936. They had six children.

The couple had a company that exploited construction materials, she did the accounting and paperwork, also customer service, where she explained about the materials.

From the age of 100, she celebrates her birthdays every half year because she says that you have to live to the fullest.

She never smoked or drank alcohol, she loves lamb and everything natural like fruits and vegetables.

On 31 March 2021, aged 109, Mendaro Guichon got vaccinated against COVID-19, making her one of the oldest people to receive the vaccine. Her granddaughter also received the Covid-19 vaccine.

Mendaro Guichon currently lives with her daughter Ruth in Durazno, Uruguay, at the age of 110 years, 33 days. 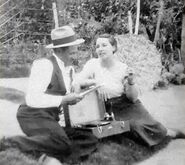 Mendaro Guichon (aged 108) with her granddaughter in December 2019