Sarah Nader (née Hamaty; 8 May 1912 – 1 May 2020) was an American centenarian who was one of the oldest victims of the COVID-19 pandemic. She was also one of the world's oldest living World War II veterans at the time of her death.

Nader was born on 8 May 1912 in Houtzdale, Pennsylvania, USA. She was the youngest of eight children born to Lebanese immigrants Jabour and Mary (née Hyder) Hamaty. She joined the Women’s Army Corps (WAC) in September 1943, and attended the WAC Administration School in Des Moines, Iowa. She rose to the rank of sergeant, and handled training and administration for 300 members of the corps. She was also a first sergeant of a medical company at a general hospital.

After the war, Nader spent 20 years working as a supply chain expert at the Defense Supply Agency in Philadelphia, Pennsylvania, before retiring in 1969. For a time, she and her husband, Bill, lived in South Philadelphia where they owned a haberdashery, before later moving to Concordville, Pennsylvania.

After her husband's death in 1987, Nader moved to a retirement community in Media, Pennsylvania, where she lived for the rest of her life. She was a fan of the Philadelphia Phillies baseball team, participated in a bowling league, and was an avid walker. She also liked ping-pong, which she played until she was in her nineties.

Nader died at her home on 1 May 2020, one week shy of her 108th birthday, due to complications from COVID-19. Because of safety concerns resulting from the pandemic, a memorial service was held remotely via Zoom.

Nader during her time in the Women's Air Corps 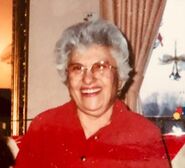 Nader in an undated photo