Shige Mineshiba (Japanese: 峯柴志げ; born 18 May 1909) is a Japanese-born Canadian supercentenarian whose age is currently unvalidated by the Gerontology Research Group (GRG). She is currently the oldest known living person in Canada.

Mineshiba was born in Toda, Nagoya, Aichi Prefecture, Japan, on 18 May 1909. After graduating from the Sakuraka High School in Nagoya, she met and married Ichiro Mineshiba in February 1931. Her two sisters lived to be 109 and 104 respectively. At the time of the Great Kanto Earthquake in 1923, Mineshiba went to Nagoya Station to cook for the victims who fled from Tokyo. Before World War II, her husband ran a senbei shop in Kyoto, but after the war he worked at welfare facilities, insurance companies, banks and flower shops. In 1968 or 1969, she moved to Toronto, Canada with her husband Ichiro at the age of 60. Her only daughter, Kyoko, already lived in Toronto at that time.

Mineshiba worked as a babysitter until 1979, when she moved to Vancouver. Her husband died in 1985 at the age of 85. At the age of 87, she had a myocardial infarction and had surgery. She has suffered from dementia since the age of 100. As of 2013, Mineshiba lived with her daughter, Kyoko (72 years old at that time). Mineshiba celebrated her 110th birthday in May 2019 and received a birthday card from the Governor General of Canada, Julie Payette. She also received a birthday card from Queen Elizabeth II.

Mineshiba with her husband, Ichiro.

Mineshiba at the age of 85. 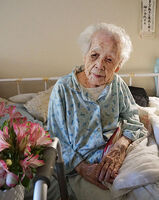 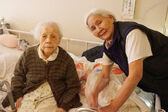