Shigeyo Nakachi [Japanese: 中地シゲヨ] (née Hiraishi; 1 February 1905 – 11 January 2021) was a Japanese supercentenarian who, at time of her death, was the second-oldest living person in Japan (behind Kane Tanaka) and the fifth-oldest validated person in the world (behind Kane Tanaka, Lucile Randon, Francisca Celsa dos Santos, and Jeanne Bot) whose age is validated by the Gerontology Research Group.

Nakachi was born in Saga, Japan on 1 February 1905, as the second of five siblings. Her mother was Kayo Hiraishi. In 1911, she entered elementary school. In 1913, she received an award for excellence. In 1916, she graduated from elementary school.

In 1923, she became a teacher. She married Goro Nakachi between 1928-1932. The couple had at least one son: Kenzo. After the end of the World War II, she began teaching at an elementary school dedicated to those returning from Manchuria.

Nakachi suffered from breast cancer at the age of 80 and underwent surgery to remove one of her breasts. After retiring, Nakachi enjoyed traveling around Japan with her ex-students and her hobby tea ceremony friends until the age of 92.

She fell in the bus at the age of 92 and broke her femur. She then broke her opposite femur at the age of 93 and around her buttocks at the age of 101, but until the age of 106 she lived with her family at home. At the age of 108, she could walk unassisted. Nakachi enjoyed hand-dancing. She was almost completely deaf. In December 2018, she recovered from a bout of aspiration pneumonia that left her bedridden and requiring a breathing tube for several days.

At the time of her death, Nakachi was the 24th-oldest person of all-time whose age has been validated by the GRG.

Nakachi (left) in 1911 when she entered elementary school.

Nakachi (second from the left in the second row) in 1913, when she received an award for excellence.

Nakachi (standing on the far right) around 1915, when she enjoyed playing tennis.

Nakachi (right) in 1916, when she graduated from elementary school.

Nakachi around 1920, with her sister.

Nakachi around 1920, when she played with her friends on the bank of the neighborhood.

Nakachi as a young woman.

Nakachi (second from the left) in 1923, when she became a teacher.

Nakachi enjoyed a tea party in the forest called "九年庵-Kunen-an".

Nakachi (second from the right) in 1925, climbing Mt. Aso in Kumamoto Prefecture.

Nakachi in 1934, with her husband Goro and son Kenzo.

Nakachi around 1940, during the World War II.

Nakachi (the left edge of the last row) in 1945, after the end of theWorld War II. 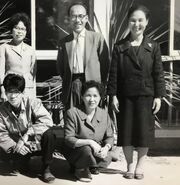 Nakachi as an older woman. 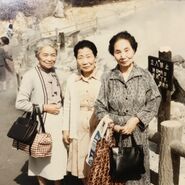 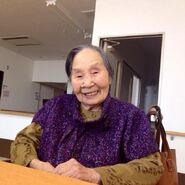 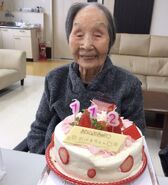 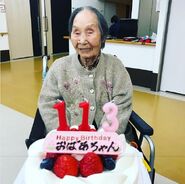