Shiro Moriyama (born 6 March 1911) is a Japanese supercentenarian whose age is currently unvalidated by the Gerontology Research Group (GRG). He is the 3rd oldest known living man in Japan, behind Mikizo Ueda and Shigeru Nakamura.

At the age of 99, he was sent a congratulatory letter from his city's mayor and a souvenir from Yuki Nakamura, Chairman of the Social Welfare Council, for his contributions in promoting forestation efforts. At this age, he still traveled by himself on the bus, and enjoyed karaoke and going to his prefecture’s many famous hot springs, such as the Shizunai Onsen. He has lived in a care home for the elderly since 2014. He became the oldest living man in the Hokkaido region following the death of Kinsaku Hayashinaka in November 2020. He celebrated his 110th birthday in 2021, becoming the 8th man from his prefecture to achieve this milestone.

Shiro Moriyama currently lives in Shinhidaka, Hokkaido at the age of 110 years, 323 days.

Shiro Moriyama in April 2010, aged 99, receiving an award for his contributions to local forestation efforts 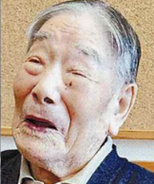