Sietje Cornelia Hof (née van der Stad; 7 January 1901 – 23 December 2011) was a Dutch-American supercentenarian who is currently pending. She is the oldest verified Dutch emigrant ever.

Sietje Cornelia Hof was born as Sietje Cornelia 'Kaatje' van der Stad in the town of Melissant on the island of Goeree-Overflakkee in South-Holland, Netherlands on 7 January 1901. She grew up on the farm and spent much time working in the fields. On 18 May 1926, she married Hendrik Hof in the town hall of Dirksland. Sietje and Hendrik met each other through mutual friends. She moved to the United States in 1948 emigrating through New York City and originally settling in Oak Ridge, New Jersey. She has lived in Prospect Park, Waldwick, Glenwood, Vernon, Towaco and Pompton Lakes before moving to Hamburg to live with her sister. She was known for her crocheting skills having made beautiful hankies for just about everyone in the family. She would make special ones for those being married and could carry on a conversation and not even look at her work as she crocheted. She loved to travel and has been to Michigan, Canada at 101 and many return trips to the Netherlands. 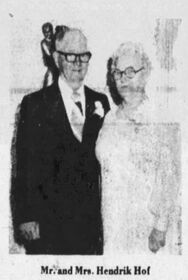 Sietje and Hendrik Hof in 1981 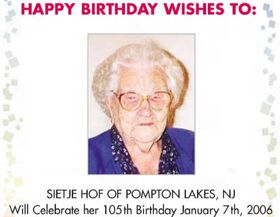