Silverio Perez Rosado [Spanish: Pérez] (born 20 June 1914) is a Puerto Rican centenarian who is one of the oldest known living men in Puerto Rico. He is the father of musician Silverio Perez.

Silverio Perez Rosado was born in Guaynabo, Puerto Rico on 20 June 1914. His parents were Jacinto Perez and Damasa Rosado. He was baptized on 9 August 1914. The Perez family are of Sephardi Jewish Anusim origin. As a child, he learned the skills of carpentry from his father.

In the mid-1950s, due to a fall from a scaffold, he was unable to continue working, and became ill with nerves. Later, he started to worked carpentry at home.

Perez Rosado with his son Silverio Perez, his grandson and his great-grandson Marcel Ruiz (undated) 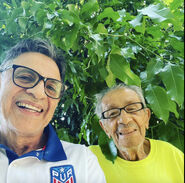 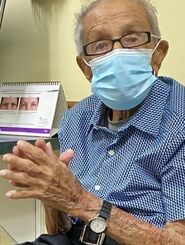