Sofia Rojas [Spanish: Sofía] (born 13 August 1907) is a Colombian supercentenarian whose age is currently unvalidated by Gerontology Research Group (GRG). She may have the title of the oldest person ever from Colombia.

Sofia Rojas was born in a small farm in Suaita, Santander, Colombia on 13 August 1907. She is daughter of Carmen Rojas, who was a single mother. She moved to Bucaramanga, Santander in the early 1960's. She had at least one son.

She became the oldest known living person in Colombia following the death of Juana Aritama on 21 May 2021.

On 12 October 2021 at the age of 114 years, 60 days, she may have surpassed the age of Carmen Emilia Jaramillo, becoming the oldest person ever from Colombia.

Rojas currently lives in Bucaramanga, Santander, Colombia at the age of 114 years, 163 days.

Rojas (aged 106) celebrating the mother's day with her son, her daughter-in-law and her grandson in 2014 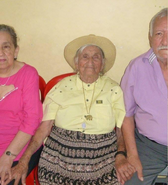 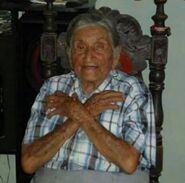 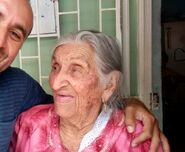 Rojas walking with help at the age of 112