Soledad Mexia (13 August 1899 – 30 August 2013)[1][2] was a validated Mexican-born American supercentenarian who, at the time of her death, was the oldest living resident in California, the world's sixth-oldest living person, and the ninth-to-last validated person born in the 1800s.[3] She was also the oldest verified Mexican-born person ever,[4] until being surpassed by Dominga Velasco on 30 May 2015.

Soledad Mexia was born in La Noria, Sinaloa, Mexico, to Benigno and Refugio Bonillas[5] on 13 August 1899. She was the youngest of two daughters. At the age of 20, she married Juan Mexia, a carpenter who constructed sets for the theatre and opera in Mazatlan. The newlyweds lived for a time in Los Angeles and Phoenix, but always returned to Sinaloa. Mexia moved to south San Diego County for good in the early 1960s, living with her children until she moved to a Nursing home in 2011. She had seven children, 24 grandchildren, 45 great-grandchildren, and two great-great grandchildren,[6] and lived most of her life in San Diego, California, United States. She enjoyed cooking, singing and watching her “novelas” (Spanish soap operas) on television.[7]

Due to her longevity, scientists in Los Angeles affiliated with the Gerontology Research Group, UCLA, and Stanford University, took blood samples from Mexia and her family members as part of a study comparing genes from supercentenarians with a control group, looking for evidence of genes that protect against common fatal illnesses.[6]

She suffered a wound in her leg in the spring of 2010. As the wound failed to respond to antibiotics, in July of that year her leg was amputated below the knee.[6] On 30 August 2013, Mexia died due to respiratory insufficiency, 17 days after her 114th birthday, at a hospice in Chula Vista, California.[4][8]

Soledad Mexia as a teenager. 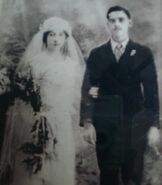 Soledad Mexia on her wedding day in Mazatlan with her husband Juan.

Soledad Mexia during an afternoon interview with Dr. Stephen Coles.