Tao Ruisheng was allegedly born on 16 July 1910 by solar calendar. He made primary studies. He is a former team leader and village leader.

In July 2018, Tao fell and had a fracture. In October 2018, he was reported to be bedridden most of the time, but to still have a good appetite.

Since October 2020, Tao was reported as the oldest living man in Shanghai; his predecessor, Song Honggen, went to limbo. At the time, he was living with five generations in the same house, the eldest of the fifth generation being to university. 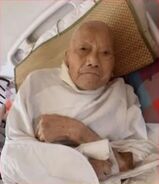 Tao Ruisheng in his supercentenarian years.