Thelma Sutcliffe (née Liesche; 1 October 1906 – 17 January 2022) was an American supercentenarian who holds the record as the oldest person ever documented from the U.S. state of Nebraska. At the time of her death, Sutcliffe was the oldest person living in the United States whose age is validated and was the last known American born in 1906 whose age is validated by the Gerontology Research Group (GRG) following the death of Lucy Mirigian. Sutcliffe also was the fifth-oldest living person in the world whose age has been validated by the GRG, behind Kane Tanaka, Lucile Randon, Antonia da Santa Cruz, and Tekla Juniewicz.

Thelma Sutcliffe was born in Benson, Omaha, Nebraska, on 1 October 1906 to August and Maude (née Adams) Liesche. On 3 September 1924, at the age of 17, she married Bill Sutcliffe in Council Bluffs, Iowa. The couple had no children, and were married until Bill died in the early 1970s. Sutcliffe had survived two bouts of breast cancer over the course of her life.

At the time of her 110th birthday in 2016, Sutcliffe lived in a residential apartment in Omaha, Nebraska. She reportedly exercised every morning, did her own laundry, and played bridge several times a week. In 2017, Sutcliffe moved in to an assisted living facility in Omaha. She celebrated her 114th birthday in October 2020. Sutcliffe's sister, Marie Kelso (1904–2011), lived to the age of 106.

In April 2021, Sutcliffe was reported to have lost most of her sight and some of her hearing, but otherwise was 'very sharp'.

On 14 April 2020, Sutcliffe became Nebraska's all-time longevity record-holder after surpassing the previous record of 113 years, 195 days set by Helen Stetter. Additionally, upon reaching the age of 113 years, 328 days on 24 August 2020, Sutcliffe became the oldest person ever born in Nebraska, surpassing the age of Clara Huhn. Sutcliffe is also the first person from Nebraska to turn 114 and 115.

Sutcliffe as a younger woman. 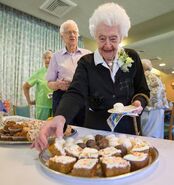 Sutcliffe on her 107th birthday

Sutcliffe at the age of 110

Sutcliffe celebrating her 111th birthday in 2017 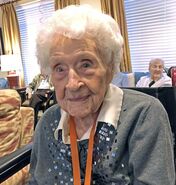 Sutcliffe at the age of 112

Sutcliffe in 2019 at the age of 113 with GRG-Nebraska Correspondent, Ethan Unruh 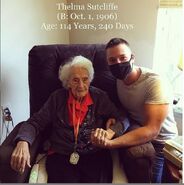 Sutcliffe at the age of 114 with GRG-Nebraska Correspondent, Ethan Unruh 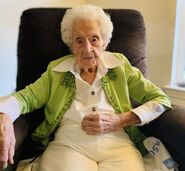 Sutcliffe the day before her 115th birthday in 2021 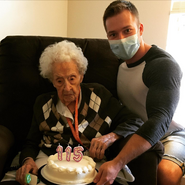 Sutcliffe in October 2021 at the age of 115 with GRG-Nebraska Correspondent, Ethan Unruh