Tibor was born as Pál Tibor Kohn on 12 June 1908, in Budapest, Austria-Hungary (present-day Hungary) into an assimilated Jewish family. His parents, Ignác and Laura (née Schattelesz) Kohn were shopkeepers. Both of them lived to be 82. His maternal grandmother died in February 1945, at the age of 93. Tibor had a younger brother, who committed suicide in 1961. The first child in the family died as an infant.

Tibor grew up in the 8th District of Budapest in a flat which was connected to the family’s shop. He attended a Jewish primary school and then a grammar school, although he could not finish it as he contracted tuberculosis at age 14. He spent almost two years in sanatoria. Since he did not take a matura exam, he became an optician apprentice at age 17. In 1933, he opened his own optical shop. In 1934, the family changed its name from Kohn to Kósa.

Tibor started to play the violin as a child. First, his mother persuaded him, but he eventually got to like the instrument. During the 1919 Hungarian Soviet Republic, he would practice an hour every day even without a teacher. He would later play in numerous quartets in the 1930s. As a result, he got into a company of richer and more educated people who would regularly go on hiking trips. Tibor met future his wife, Jolán, at one of these trips in the summer of 1936. They married in 1936. Their only child, János, was born in 1939. Before their son’s birth, they converted to Christianity due to the right-wing leadership’s oppression towards the Jews. They almost emigrated to Australia in 1940, but their ship did not departure.

During WWII, Tibor was sent to different parts of the country as a forced labourer four times. During the Nazi occupation of Hungary, Jolán and János lived in a Red Cross rest home, while Tibor was hiding in different parts of Budapest. His parents and grandmother survived in the ghetto.

Beginning in 1945, Tibor filled various political positions in the Communist Party. In 1953, he was imprisoned for eight months due to a frame-up. From 1955, he worked as an optician again for a few years. After that, he worked as an economical analyst at a foreign trade company. In 1960, thanks to a business trip, he got to visit Ghana, Guinea, Nigeria, Sierra Leone and South Africa. In 1961, he was sent to Cairo, where he worked at the Hungarian embassy. He and his wife lived in Egypt for three years, they moved back to Hungary in 1964.

Tibor retired in 1971. After that, he would still work as an interpreter for 25 years, until the age of 87. He spoke English and German at an advanced level, and French and Russian at an intermediate level. As a pensioner, he and his wife travelled across Europe. Jolán died in 1987. After almost twenty years of being alone, Tibor got a girlfriend at age 97; a widow 22 years to his junior. Tibor would sleep at her place during weekends and they would have lunch together on weekdays. As a centenarian, Tibor was in exceptional mental health and was also very fit.

Tibor Kósa at the age of 2.

Tibor Kósa as a forced labourer in 1943. 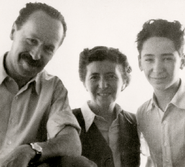 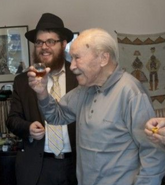 Tibor Kósa at the age of 105 with orthodox rabbi Slomó Köves.