Captain Sir Thomas Moore (30 April 1920 – 2 February 2021) was a British centenarian who raised more than £32.8 million for the British National Health Service during the COVID-19 pandemic in 2020.

During the first lockdown (due to the COVID-19 pandemic) in the United Kingdom in 2020, he decided to walk 100 laps on his garden with his walker, in order to raise money for NHS Charities Together, which raises funds for UK hospitals. His first aim was to raise £1000, but he managed to raise over £32.8 million.

Moore was knighted by the Queen Elizabeth II in July 2020. A film was also produced about his story. In January 2021, he tested positive to COVID-19, while he was being treated for pneumonia. On 2 February 2021, he died of complications from COVID-19 at the age of 100 years, 278 days in a hospital in Bedford, Bedfordshire, England, United Kingdom.

Moore as a second lieutenant in the British Army (c. 1941) 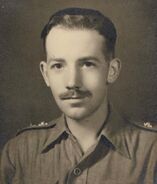 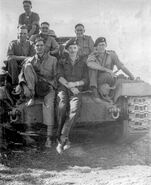 Moore during the period of his 2020 fundraiser

Moore on his 100th birthday

The Queen Elizabeth II conferring the Honor of Knighthood on Captain Sir Tom Moore on 17 July 2020 at Windsor Castle.

Moore with both of his Guinness World Records certificates