Tomoji Tanabe [Japanese: 田鍋 友時] (18 September 1895 – 19 June 2009) was a validated Japanese supercentenarian who was the world's oldest living man following the death of 115-year old Emiliano Mercado del Toro, until his own death two years later. He is currently the oldest validated man ever from Miyazaki Prefecture and the third-oldest validated Japanese man ever, behind Jiroemon Kimura and Yukichi Chuganji.

Despite being the youngest man to hold the title of world's oldest since John Painter (over 7 years before) at the age of 111 years, 128 days, he kept the title for over two years and managed to enter the top 100 oldest people ever.[1]

Tomoji Tanabe was born in Miyakonojo, Miyazaki, Japan on 18 September 1895. He began his career working as a land surveyor and civil engineer at the local city hall, and later worked in the agricultural and livestock industry starting in his 40s. He married his wife, Sugi, and the couple had five sons, and three daughters - all eight of his children were still alive at the time of his death. Sugi died in 1989 at the age of 93.

Tanabe maintained a careful, alcohol-free diet, and until near his death took long walks by himself every day. At the time of his 113th birthday in 2008, he was still remarkable shape, capable of walking unaided. He did manage to rank among the 100 oldest persons and the 10 oldest men ever documented. He is still in the Top 12 of the oldest verified man ever. 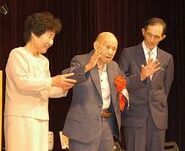