Valentine Ligny (née Bonel; 22 October 1906 – 4 January 2022) was a French supercentenarian whose age is validated by the Gerontology Research Group (GRG). At the time of her death, she was the second-oldest living person in France after Lucile Randon, and the sixth-oldest living validated person in the world.

Valentine Ligny was born in Avion, Pas-de-Calais, Hauts-de-France, France on 22 October 1906. She had three siblings. Her family came to Amiens in 1911. She has some memories of World War I.

In 1933, she married Pierre Ligny. The couple settled in neighbourhood Saint-Acheul, Amiens. They had three daughters: Nicole, Claudine, and Francoise.

In 1940, Ligny evacuated in Amboise, Indre-et-Loire in a cart with her three daughters, because of World War II. Her husband was prisoner in Amiens citadel. Her house, who was in Croy street, was destroyed. After the Liberation, Ligny came back to Amiens with her daughters, and her husband, who was released, rebuilt their house.

In 1947, Ligny's husband died while saving his nephew from drowning in Cayeux-sur-Mer.

Ligny had a career as an office worker in the company Boulogne. She retired at age 65.

In June 2014, Ligny said she would live to age 110, and wouldn't move in a nursing home. She said: "I don't see myself going elsewhere. Because everything is here, my memories, everything." She sometimes cooked crepes or semolina cake with her home helper. Her home helper also helped Ligny doing her shopping, taking her at the bakery or to the butcher's.

In July 2015, Ligny's family decided to move her to a nursing home, because falls made it too dangerous for her to live alone.

Shortly before her 110th birthday, Ligny was hospitalized due to a fall she sustained while attempting to get out of bed, but this didn't prevent her from celebrating her birthday some days later.

On her 111th birthday, when Ligny was asked how she feels, she replied: "Well, I feel good, you know!". At the time, she was still able to walk with assistance. Her relatives said that her strong character may be the secret of her longevity.

One day, when Chantal Modeste reminded her about the secret of Jeanne Calment (drink a glass of porto every day), she humorously replied: "Oh yes, but her, she was losing her mind." Around December 2019, Ligny had another fall, but did not suffer any fractures.

Ligny died in Amiens, Somme, Hauts-de-France, France on 4 January 2022 at the age of 115 years, 74 days. At the time of her death, she was the second-oldest living person in France (behind Lucile Randon), and the sixth-oldest validated living person in the world (behind Kane Tanaka, Lucile Randon, Antonia da Santa Cruz, Tekla Juniewicz, and Thelma Sutcliffe). She was also the last surviving French person born in 1906, as well as the second to last known surviving French person born before 1909 (after Lucile Randon).

Ligny was the oldest living person in Hauts-de-France region (since the death of Madeleine Ragon on 8 March 2017) and was the second-oldest person living in France, behind Lucile Randon. Additionally, she was the third-oldest living person in Europe, behind Randon and Tekla Juniewicz. Following the death of Mina Kitagawa on 19 December 2020, she became one of the top ten oldest validated living people in the world until her death on 4 January 2022. 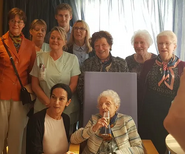