Not to be confused with Violet Brown.

Viola Brown (née Roberts; born 4 October 1911) is an American supercentenarian whose age is currently unvalidated by Gerontology Research Group (GRG). She currently is the oldest known living person in Virginia.

Viola Brown was born in Fauquier County, Virginia, USA. She was one of the 13 children of James Roberts and Maria Hosby Roberts. When she was 7, Brown and her parents moved to Clarke County to work at Springfield Farm. It was there that she began a life of cleaning, cooking and caring for others. For 30 years, Brown worked for families who lived at the Knoll, a home on South Church Street in Berryville, before returning to work at Springfield Farm in the early 1960s while still care-taking at the Knoll.

She married John Lampkin on 28 December 1936. They built a house on Josephine Street together. Its main two-story structure originally was part of a livery stable on Main Street that Lampkin moved about seven blocks. Lampkin died in 1982. Six years later, Brown married the Rev. Paul Brown, who was the pastor of Zion Baptist Church on Josephine Street before he died in 1998.

She currently lives in Berryville, Fauquier County, Virginia, USA, at the age of 110 years, 112 days. 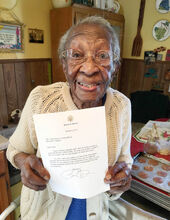 In 2017, President Barack Obama sent a signed letter to Viola Brown on the occasion of her 106th birthday. 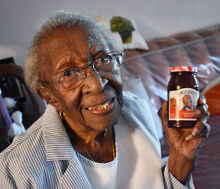 Viola Brown was honored by NBC’s Today Show in 2018, sending her a Smucker’s jar with her face on it. NBC weatherman Willard Scott and Smucker’s began celebrating centenarians on the Today show in 1983. 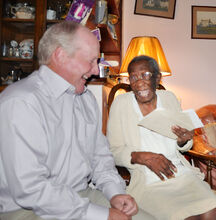 Viola Brown shares a laugh with Clarke County Supervisors chair David Weiss when he visited on her 107th birthday in 2018. 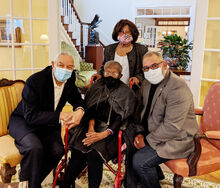 Prior to her 109th birthday, Viola Roberts Lampkin Brown posed with her 1988 cookbook, “Viola’s Favorite Recipes.” Mrs. Brown began working as a domestic when she was 7, and cooked her entire life although she did not use an electric stove until 1960. 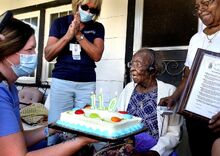 Viola Brown is presented a cake on her 110th birthday during a party at her home on Josephine Street in Beryville. From left are Sierra Rudolph and Cindy Buxton of Blue Ridge Hospice and at right is her daughter, Vonceil Hill. Hill is holding a proclamation presented by Clarke County Board of Supervisors Chairman David Weiss proclaiming Oct.4 as "Viola Roberts Lampkin Brown Day" in Clarke County. 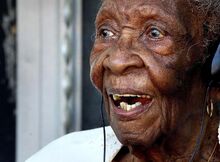