Sister Vivian Ivantic, OSB (born 28 August 1913) is an American centenarian who is one of the oldest known survivors of COVID-19, having recovered from the disease at the age of 106.

A member of the Chicago Benedectines, Ivantic is one of the oldest ecclesiastical people in the world. She has campaigned for the ordination of female priests in the Catholic Church, and has also took part in anti-racism protests.

Sr. Vivian was born to immigrant parents from Slovenia on 28 August 1913, and grew up in north Chicago, Illinois. She had eight siblings, but in World War II, two of her four brothers were killed within a week of each other. As of 2020, her brother Bill is her only living sibling. Their grandmother died from Spanish Flu during the 1918-19 pandemic.

Sr. Vivian joined the Chicago Benedictines in 1933, and worked as a teacher and librarian at the St. Scholastica Academy, a former all-girls Catholic high school run by the sisters. In 1977, she became the community's archivist, and meticulously reviewed old documents and memorabilia that record changes in the church's history. She held this position until her retirement at the age of 102.

In August 2013, a Mass was held celebrating Sr. Vivian's 100th birthday and the 80th anniversary of her joining the Benedictines. Sr. Vivian, who always wanted to become a priest, spoke out in favour of female ordination, which is prohibited by the Catholic Church. In April 2019, at the age of 105, she took part in a Stand Against Racism event in Evanston, Illinois, which was a protest against racial injustice and police brutality.

Sr. Vivian currently lives in the St. Scholastica Monastery in Chicago, Illinois, where she enjoys feeding the squirrels outside. In April 2020, she contracted COVID-19 during the coronavirus pandemic; her symptoms were so mild, however, that she thought she just had a cold. She successfully recovered, making her one of the world's oldest survivors of the disease. She went on to celebrate her 107th birthday in August 2020.

Sr. Vivian (front row, fourth from right) at her eighth-grade graduation from Mother of God School in Waukegan, Illinois, in 1927 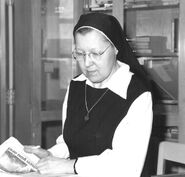 Sr. Vivian before the Mass celebrating her 80th Jubilee and her 100th birthday in August 2013

Sr. Vivian on her rounds of feeding the squirrels, February 2017 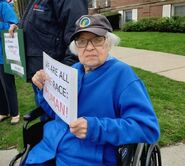 Sr. Vivian, front row, sits with her brother Bill Ivantic in front of her family after a Mass to celebrate her 106th birthday in August 2019