Voncile Althena Dry/e (24 April 1907 – 7 September 2019) was an American supercentenarian whose age is validated by the Gerontology Research Group (GRG). She is the oldest validated person ever to have been born in the state of Florida (see the list).

Voncile Althena Drye was born in Okaloosa, Florida, USA, on 24 April 1907. Her parents were William and Missie Drye. She was the eldest of the couple’s eight children.

In the 1940s, she moved to Tampa, Florida. She worked in Morrison’s Cafeteria and Jack Pendola’s Men’s Apparel until her retirement.

As of her 110th birthday in 2017, she had six grandchildren. She was able to walk, albeit with the aid of a walking frame. Voncile was affectionately known as “Mother Drye”. 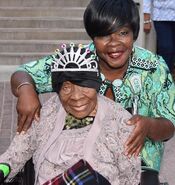