Waldemar Levy Cardoso (4 December 1900 – 13 May 2009) was a Brazilian centenarian and the last living Marshal of the Brazilian Army.

Cardoso was born on Rua Evaristo da Veiga in Rio de Janeiro, Brazil on December 1900. He had Jewish Algerian-Moroccan ancestry.

He graduated from military college at the top of his class in late 1918 (making him a World War I-era veteran although he never saw combat). In 1924 he took part in the uprising against the Brazilian Federal Government and also fought in the Brazilian Revolution of 1930.

During the World War II, Cardoso – at this time a Lieutenant Colonel – commanded an artillery battalion with the Brazilian Expeditionary Force. During the Allies' Italian campaign, he was mentioned in dispatches in World War II.

Cardoso was promoted to Field Marshal upon his retirement in 1966. After his retirement he acted as president of Petrobras between March and October 1969, acting as company's counselor between 1971 and 1985. He lived on Rua Tonelero in the Copacabana district of Rio de Janeiro.

In 2007, at the age of 107 years, he returned to Itu to see the party of the 90th birthday of the 2nd Light Artillery Group, the actual designation of the old Regiment he had commanded.

He died in the Hospital Central do Exercito on 13 May 2009 at the age of 108 years, 160 days. At the time of his death, he was the last Brazilian Field Marshal. 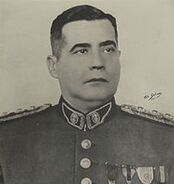 Undated, during his military service