Walter Breuning (21 September 1896 – 14 April 2011) was a validated American supercentenarian who was the world's oldest living man following the death of Henry Allingham on 18 July 2009, until his own death nearly two years later. He was also the third-oldest validated living person in the world overall, behind Maria Gomes Valentim and Besse Cooper.

Walter Breuning was born in Melrose, Minnesota to John Breuning and Cora Morehouse Breuning on 21 September 1896, and had four siblings, two sisters, and two brothers. Later on in life, he claimed to have memories from the 1800s, with his earliest memory he could recall being of his grandfather, a Civil War veteran, telling him stories from the war. In 1901, when he was only 4 or 5, his family moved to De Smet, South Dakota, where he went to school for 9 years until his family broke up in 1910, when Breuning was 14. His family lived without electricity, water, or plumbing. Although his parents died at only 50 and 46, longevity was still present in Breuning's family. His paternal and maternal grandparents all lived into their 90s, and his siblings lived to the ages of 78, 85, 91, and 100. His only living family are one niece and three nephews. All of whom are now in their 80s, plus great-nieces and great-nephews. In 1910, Breuning dropped out of school and began scraping bakery pans for about $2.50 weekly.

He married in 1922 and they remained married until his wife's death in 1957. They had no children and Breuning was believed to have never married again, as he thought second marriages don't work. However, after his death, a marriage certificate was located, revealing that he married Margaret Vanest on 5 October 1958. Margaret died on 15 January 1975.

On his 110th birthday, in September 2006, Breuning was declared the oldest living retired railroader in the United States.

In an interview with the Associated Press in Autumn 2010, Breuning stated that he had no fear or rejection of change, also death. He said "We're all going to die. Some people are scared of dying. Never be afraid to die. Because you're born to die". Breuning died peacefully in his sleep of natural causes in a Great Falls hospital at 3:30 pm local time on 14 April 2011, just five months shy of his 115th birthday. He had been hospitalized since the beginning of the month with an undisclosed illness. At the time of his death, he was the third (originally believed to be the second, but Maria Gomes Valentim was later verified) oldest verified living person in the world, and the world's oldest man.

At the time of his death, Breuning was the second to last surviving man to have been born in 1800s. Breuning and Jiroemon Kimura of Japan were the only validated 1800s-born men who survived into the 2010s, since all other validated 1800s-born men died in 2009 or before. After his death, Jiroemon Kimura, who was five days shy of 114, became the oldest living man. Kimura held the title for over two years until his death as the oldest man ever on 12 June 2013 at age 116 years, 54 days. 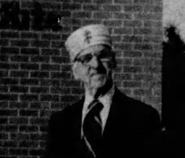 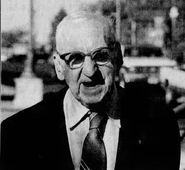 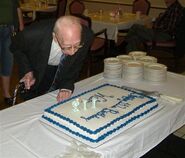 Aged 112, during an afternoon interview with Dr. Stephen Coles. 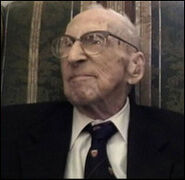 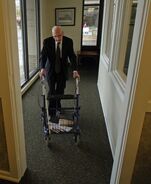 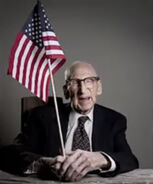