Wang Sunshi claims to have been born in 6 October 1909 in Qing dynasty (now China). Actually, she only remembered she was born in 1909, and when she was 96, her grandchildren chose the 6 October for her birthday.

In her childhood, Wang worked as a farmer during the day (she stayed a farmer all her life), and made sewing during the night. Her mother died when she was 6, and she grew with her grandmother.

Wang married at age 18. She had 10 children, but 5 died prematurely (some of them died when they were one meter high), and only four sons and a daughter managed to grow up.

After the foundation of People's Republic of China, she send her 5 children to school, saying: "It's not grave to fail at exams, read more books and even if you are farmers, you'll have brilliant hearts." Wang was illiterate, so she had a great admiration for knowledge.

With her ancestors, Wang learnt how to make medicines. Wang can make haemostatic powder by filling a pork's gallbladder with whitewash powder and other things.

After her marriage, Wang learnt how to make a powder to heal canker sores. She used borneol, spiders making webs, and other things; with a special processus, it makes a powder. Actually, at the time, breastfed children often suffered of canker sores.

Being kind, she never asked money for her services. According to the tradition, only the oldest son and the daughter-in-law are allowed to inherit the secret recipes. However, estimating that one more person can help many people, she learnt it to another person, but this person made a business, and Wang shouted after the person.

In 1973, Wang's husband, who was ill since several years, died. At the time, she still has three acres of fields, and cultivated plants, bred beefs and chickens. She insisted to continue to live alone.

Wang's grandson sometimes sent her 100 yuan, and she used to go at the market with it. One time, a thief took her money, but when her grandson asked her if she was sad, she said that she acted as if he never gave her money.

Wang learnt to play mahjong at the age of 97. In her centenarian years, she kept on working in the fields. If corn or wheat ears fled the combine harverster, she still pick them up, because she doesn't like wasting food. At the age of 99, she visited her nephew living in Hangzhou (the capital of Henan Province).

One night, it was raining cats and dogs, and the bedding of the 106-year-old was wet. Wang got out of bed, and although three tiles from the roof fell on her pillow, she slept again in her bed. Because there are rats in her house, she keeps a stick near her bed to strike them if they approach. One time, the stick fell, and when she lowered to pick it up, she was bitten by a rat at forehead. She went discreetly to the clinic to take dressings, and wore a hat until she recovered, to hide her wound to her family.

In 2018, at the age of 108, Wang fell while going to toilets. She went at hospital for the first time of her life, and was unconscious for three days and three nights. However, she managed to wake up, saying she would go back to home. She stayed at hospital for a half-month, and before getting back at home (where she lived more than 100 years), the doctor said she hadn't any health problem (besides sodium carency): she has the heart of a 80-year-old. Since then, there are phone numbers written in her house, and her neighbours visit her to see if something happened.

At the age of 111, she was reported to be in good health despite her age. She was able to walk with a cane, and had good eyesight and hearing, although she sometimes needed to take drops for her eyes, and hadn't teeth anymore. Her oldest son was aged 85, the second 75, and the third 71, and her oldest grandson was aged 60. She still cultivates vegetables in her garden and fills a bucket with water to do cooking and laundry.

Wang said that her descendants "live 10 000 times better than before". Wang Qinghai [Chinese: 王青海], the chef of the restaurant Beijing Roast Duck [Chinese: 北京烤鸭店], cooked her horseshoe crisps, a speciality fron Shangqiu, and sent her.

Her second daughter-in-law, Guo Yuling [Chinese: 郭玉玲], thinks that Wang haven't any secret of longevity. She eats anything her family cooks (even meat), although she has a preference for chili, noodles, meat with sesam, and vermicelli cooked with cabbage. She eats two meals a day (breakfast and lunch), and drinks milk every evening. She doesn't smoke and rarely drinks alcohol.

Wang also walks through the village with a walker or a cane when she's fine. She never took any medecines. When she's ill, she drinks lukewarm water. Also, she likes chatting, and not fears the death.

In May 2021, Wang was interviewed by a journalist in Tanglou Village. At the time, she was reported to be the oldest living person in the village. 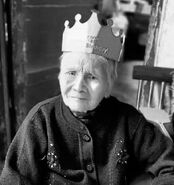 Wang Sunshi at one of her birthdays.