Wilhelmina Hoorn was born as Wilhelmina Ronck in Tegelen, a city district of the municipality of Venlo in Limburg, Netherlands on 6 November 1903. On 7 June 1922, aged 18, she married Hendrik Cornelis Hoorn in Rotterdam. She emigrated to the United States because of the Great Depression of the 1930's and settled in Long Island, New York, but she mentioned that the Great Depression was ten times worse in the United States than in her native country.

She married and got three daughters. Even though her husband died at the young age of 46 and she was left with eight dollars, Wilhelmina managed to earn a good living and keep a good home, which she was very proud of. Later, she started volunteering at Florida Hospital Altamonte, knitting baby hats, booties and blankets. She was described by her daughters as very independent.

Hoorn as a young woman. 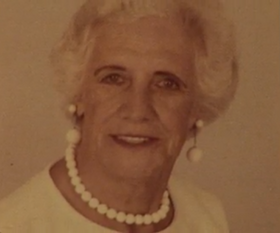 Hoorn in her later years.