Wu Zhicheng was allegedly born on 10 August 1910 (by solar calendar) in Suzhou, Jiangsu, Qing dynasty (now China). She came to Shanghai at age 19 to work in a silk factory, and worked here until her retirement.

In 2012, Wu began to use computers and tablets. She also learnt how to play shares. In October 2012, she met with Qin Maotang, the oldest living man in Shanghai at the time.

In 2017, Wu met with 107 year-old Chen Zhongbo (who would later become a supercentenarian himself). At age 107, she had 5 generations in her family. In February 2018, she was hospitalized because of a fever, and refused eating until she went back to home.

In August 2019, Wu celebrated her 109th birthday. Her family took her on a cruise. At the time, she was reported to live with her daughter Bian Wenqing [Chinese: 卞雯卿] (her eighth children) and her son-in-law. She does gymnastics every day, and manages a family group on WeChat with her iPad. She likes eating chicken skin, duck skin, and Shanghai hairy crabs. She sometimes drinks white vine and rice vine.

Since October 2020, Wu was reported as the second-oldest living woman in Shanghai, after Xu Senzhen. 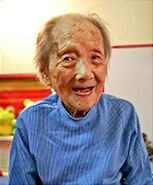 Wu Zhicheng in her centenarian years.

Wu Zhicheng (left) and Chen Zhongbo (right), both age 107, attending a ceremony in Shanghai in October 2017.