Xu Senzhen was allegedly born on 22 September 1907 by solar calendar, in Hai'an County, Nantong, Jiangsu, Qing dynasty (China). She never had to work.

Xu married and had three children (one deceased as of October 2020): two sons, and a daughter (Chu Junli). She educated her children at home.

Xu lived for years in Renmin Square, Middle Huaihai Road, Shanghai with her oldest son. When her youngest son began to work in Hai'an County, Nantong, she moved regularly between Shanghai and Nantong. In her old years, she became vegetarian, and liked playing cards.

In October 2015, Xu was reported to be the ninth-oldest living person in Shanghai. At the time, she was reported to be able to walk without any assistance. She still had good eyesight and hearing, and was able to communicate with people without problem.

Since October 2018, Xu was reported to be the oldest living person in Shanghai. She would have hold that title since October 2017 (as she was older than Luo Shimin), but she wasn't in the city's statistics in October 2016 and October 2017.

At the age of 111, Xu was reported to lose her eyesight and her hearing, but to have a clear mind. Her daughter said that Senzhen is kind, optimistic. Even if she's thrifty, she's ready to help people in difficulty. 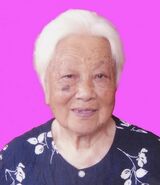 Xu Senzhen in her centenarian years. 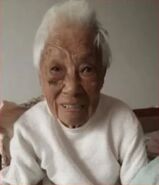 Xu Senzhen in her supercentenarian years.