Ye Ming [Chinese: 叶鸣] (born 29 December 1914) is a Chinese centenarian who is one of the oldest known survivors of COVID-19, having recovered from the disease at the age of 107.

Ye Ming was born in China (then Republic of China) on 29 December 1914. In the 1930s, he joined the Chinese Communist Party. He worked as an anesthesist in the Third People's Hospital of Shanghai (now Shanghai East Hospital) until his retirement.

Some years after the Korean War, Ye married a woman (aged 94 in 2022). The couple had four children: three daughters (the eldest aged 70 in 2022), and a son. Their youngest daughter, Ye Fen [Chinese: 叶芬], was aged 60 in 2022; according to her, Ye has a frank personality, and is welcoming. She is his caregiver, as the health of her sister and her brother are bad. Around 2015, Ye became bedridden.

On 11 April 2022, Ye was transferred to Shanghai Pudong Hospital, due to contracting COVID-19. Nine days later, his daughter Ye Fen, who accompanied him to hospital, also contracted COVID-19; as she was in good health, she recovered as of 27 April.

On 27 April, Ye was transferred in the intensive care unit. His condition later improved from day to day. On 14 May 2022 (after 32 days of treatment), Ye was discharged from Shanghai Pudong Hospital, after being tested negative two times. He was transferred to Shanghai East Hospital. Her daughter Ye Fen says that, although he can't speak very well, he can open his eyes, and sometimes whispers her some things.

Ye Ming as a young man.

Ye Ming as a young man. 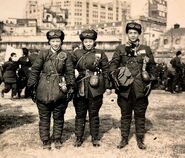 Ye Ming (right) in 1950, on the battlebield during the Korean War, with Wang Manru (left) and Mo Yunzhu (a nurse, middle).

Ye Ming working as an anesthesist.