Zhang claimed to have been born in 5 October 1904 in Aoyang, Shouning County, Ningde, Fujian, Qing dynasty (China). He was really poor and many times he didn't have anything to eat. The extreme scarcity made him look short and small. In 1935, his family were infected with an infectious disease. That disease caused death of his wife and father. He never smoked cigarettes or drink alcohol.

Even in his claimed 100s years, he could walk to his daughter, Zhang Chengfeng, who lived at a distance of 1.5 km. He was also able to planting vegetables and sometimes sell it to market. Also he was able to walk around for long time, never need other people to accompany him and went to the bus. Zhang Daping passed away in 5 February 2017 in Aoyang, Shouning County, Ningde, Fujian, China at the claimed age of 112 years and 120 days. 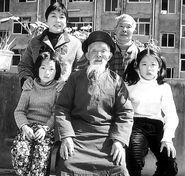